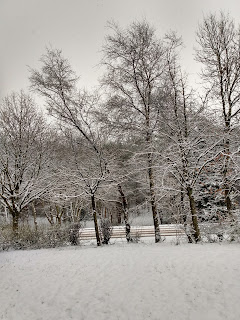 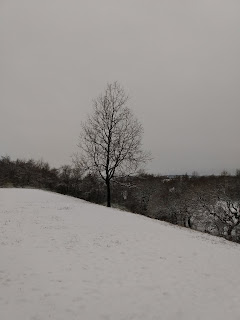 The rest of the family are watching The Mandalorian. I watched a bit but was really only interested in the fish people's knitwear, so I have wandered back upstairs and tried to do my Top Nine of Instagram posts. However the Top Nine app says it's 'housekeeping' so I'm assuming that much of the planet is doing the same thing. I'll try again tomorrow.

I woke up this morning to more snow* - snow that was falling in big fluffy flakes, and as I am very much a child when it comes to snow (unlike my actual children who can take it or leave it) I immediately got dressed and went for a walk, taking loads of pictures both on my phone and my compact camera. The ones on my compact camera are much better but as using those on this post would require me to use my actual computer which is in the room where The Mandalorian is happening, I'm using the less good ones on my phone. Also I can't seem to move them about on my phone which is why they're stuck at the top instead of scattered through as I usually do!

My walk was blissful - hardly anybody about apart from a few dog walkers, and their dogs obviously. I saw one dog going absolutely delirious with joy at chasing tennis balls in the snow - 'tennis balls! snow! Life doesn't get better than this when you're a dog!' Its hard to resist that much enthusiasm.

The rest of the day has been fairly idle - an excellent video call with my brother, some reading, watching the New Year special of the Great British Sewing Bee (inconveniently not shown on BBC Scotland, but somebody on Instagram kindly pointed out that you can change the region setting on iPlayer) which was brilliant, and now I have the theme tune to Black Beauty in my head. Talking of sewing, I actually meant to sew another mask today but didn't get round to it. Mañana.

I've seen a lot of reviews of the year, but it feels a little pointless to me. We didn't go anywhere or do anything much. I learned to darn but did not make sourdough loaves - my husband has been working from home at the kitchen table since March so it has not been a year for pottering in the kitchen. Apart from the general worry that we've all had it hasn't been a bad year for us, but it's certainly been a cramped year.

11.29pm - they've given up on tv for the night, I'm on the pc, and I can't be bothered rewriting what I've already written so have some more pics! (Actually now that I see the phone pics on a decent-sized screen they're better than I thought - always a nice surprise!) 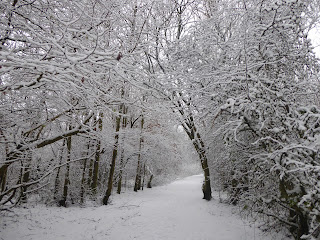 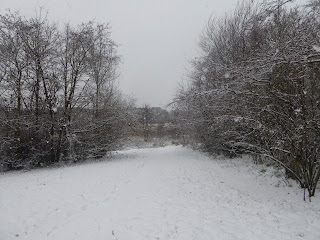 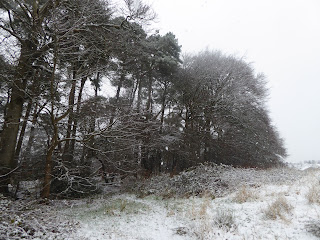 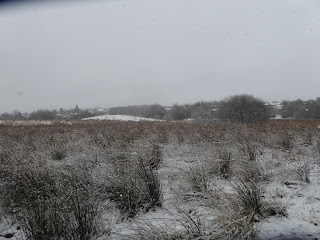 * Just enough to feel like snow rather than the dusting of the last few days. 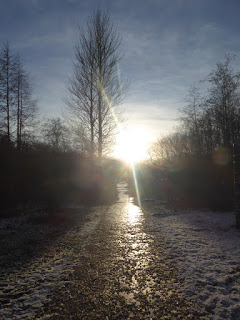 The Boy and I went for a walk today to take advantage of daylight and stuff (I went for a walk yesterday, during 'daylight' hours but it was cloudy, wet and windy so the daylight was somewhat notional), and it was lovely - cold, bright, fresh, crisp, all those wintry words that frequently don't apply during a Scottish winter. Well, cold does, but often it's wind-chill rather than actual cold.  It snowed a little over night, just a sprinkling, and some areas had melted where the sun had been shining, in other patches it hung on in the shade, and it was quite icy in places.  So, vitamin D topped up, exercise achieved.  Then back home to veg out some more! 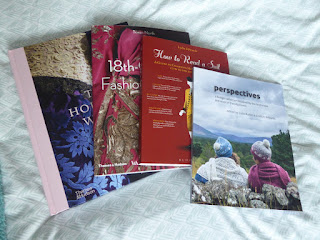 Vegging out involves a certain amount of curling up with a coffee, a chocolate orange, and a book. These are my Christmas books this year - one knitting book (thank you, dear brother!), and three books on historic clothing (thank you dear parents and husband!). All gorgeous and fascinating!  As mentioned before, clothing history is something I've got back into this year, and these books are just full of information and pictures of details and absolute gorgeousness. My own style is scruffy -  very much jeans, t-shirt, jumper (sweater, that is, for the North Americans) or cardi/hoody if it's cool - so worlds away from the clothes I'm looking at and admiring, but it's not about fancying myself a Disney princess (howling with laughter at the very thought..), it's about how stuff was made, the work and skill and talent that went into it.  I'll stop enthusing now, but honestly these books are just amazing.

So I'm going to wander off and make another coffee now - I hope everyone's having a peaceful time and staying safe! 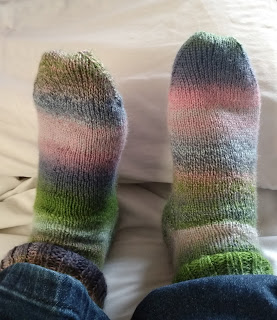 This was before they were washed - they're on the radiator, almost dry now. Oh wow, though, they make me so happy! (It's the little things - which is just as well really.) And I've still got loads of the wool left - what shall I do with it?

As a reminder to myself for next time, the best grafting YouTube video. I think I almost have it memorised now, but just in case... 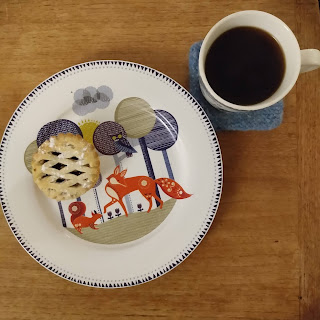 Or mince pies. Your choice.

Bad puns, I love'em. I'm not a huge fan of pastry to be honest, but sometimes the occasion calls for mince pies - just trying to feel festive! They're only shop-bought but I may make some later in the month.

Still no sock progress - there's never as much time available at the weekends as I think there's going to be, though I did get to sleep in on both days, which probably explains it. Tonight our television went bust - thank the entertainment gods that this did not happen during I'm A Celebrity...  I don't actually watch a lot of telly (except in Nov/early Dec) and there's a lot of stuff I can watch on my phone so it's not the end of the world at all. I'd rather that than the cooker (which did happen one Christmas day!) or the heating or something. 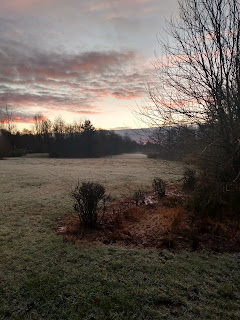 The Elder Child and I went for a quick walk this afternoon (so, sunset) - it was still frosty and the paths were quite slippery in places but it was good to get out in sort-of-daylight. Beautiful skies anyway. I'm trying to plan this week a bit (sounds like one of those productivity things - 'what do I want to get out of this week?'). We'll see how it goes! 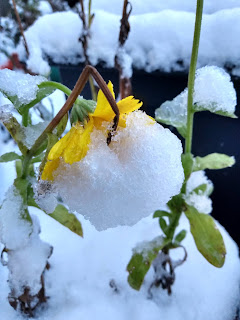 Didn't manage any knitting so no sock progress, but I fixed the wonky drawer in the bedroom so I can actually extract some socks without having to jam my hand in and and grope for them (it's like a Bushtucker Trial minus the creepy-crawlies), so big success!
I'm watching the I'm A Celebrity final with Miss M so that'll be my last gratuitous  bugs'n'critters mention of the year... I've loved it this year - it's been the best kind of escapism in a rubbish year!   (It's just finished, won't spoiler it, but lovely ending).
I can't think of anything else to write about now. Ooh! Yes! I've been reading up a lot on clothing history recently - it's something I've been interested in since I was quite young, though with the emphasis on history since I have zero interest in modern fashion. Apart from reading a lot I've been watching YouTube videos by various historical costume enthusiasts, Living History types, and so on, and yesterday I watched a most excellent video discussing the attention to detail and authenticity in.... A Muppet Christmas Carol! Now I love that film anyway, but I'd never really noticed the costumes and they're amazing. Link to the YouTube thing here - actually,  no there isn't as I can't figure it out and my mobile is almost out of charge so I'll add it tomorrow. In the meantime the YouTuber is Abby Cox and the video is called something like 'The costume designers for A Muppet Christmas Carol deserve an Oscar'. I will never sing along to the mice in the wall again ('no cheeses for us meeces') without admiring their costumes!
Good night!
(Edit two days later - still failing with that link. Will add it sometime!)
(next edit - the link!)
Posted by Peeriemoot at 11:00:00 pm No comments:

And that's good afternoon/evening in Gaelic, because I needed a post title and sometimes it's easier to follow a theme. 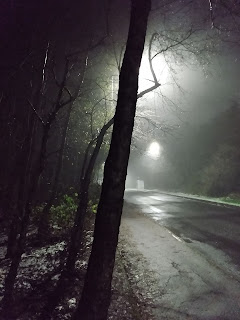 Chilly evening in fact - I went for a very quick walk to get some air earlier. It was frosty and foggy, and there was a sprinkling of snow last night, so I wasn't out for long. There was however that brilliant crunch crunch you get walking on a thin layer of snow that's frozen harder.
The sock did not get finished. It took a bit longer to get to the toe shaping than I had anticipated, but it should go a bit more quickly tomorrow if I get the opportunity.
So close... 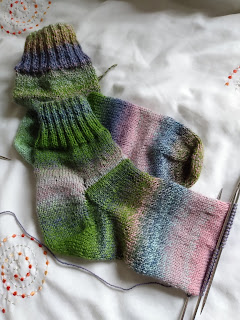 According to my phone I started these socks five years ago, so it's about time really! I'm looking forward to wearing them, it's definitely woolly socks weather just now. I have noticed there's an annoying gap at the side of the heel flap. I always seem to get that no matter how hard I try not to. I don't know if that's just my quirk but I suspect it's a common problem.

Right, it's late, I must sleep. But look three days posts in a row - pretty good!

(And they say you can't learn anything from reality tv*) 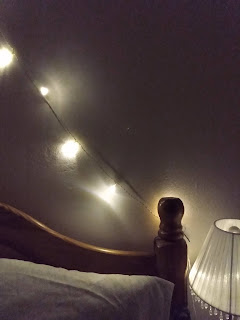 I am so ready for my bed! I don't even know why I'm so tired today - I think I slept alright last night, though I did that annoying thing of waking up half an hour before my alarm was supposed to go off. So I'm at least half an hour short!

Nothing of import to impart - have a picture of a Zombie Apocalypse: 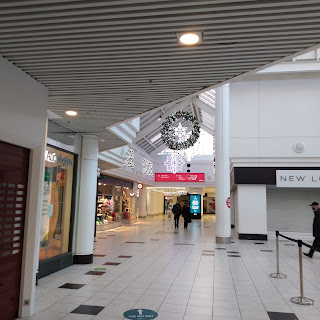 Town centre, three weeks before Christmas. Lights and decorations up, hardly anybody around, most things shut. I was down there to go the Post Office and it was eerie walking through the centre. Ah well, hopefully things will change on the 11th, though I feel a bit superstitious even thinking it. In the meantime I have a sock to finish. Well, lots of other things to do as well obviously, but I have a second sock that is almost almost at the toe shaping. Maybe tomorrow's post (look at me, committing to another post..) will be a Pair of Socks!

* It's Welsh for 'good evening'. Ant and Dec taught me that.

Peeriemoot
I'm Ginny, a Scottish housewife who's interested in everything, proficient at nothing. On Ravelry I'm Peeriemoot.